For Star Wars™ fans of all generations, Star Wars: Galaxy’s Edge is a dream come true.

For the first time ever, there’s a place where you can live your very own Star Wars™ story. As you step through its gates, you leave Florida and land in Batuu - a remote planet in the far reaches of the galaxy.

With an entirely new land to explore, you can finally live your adventure in a galaxy far, far away!

Star Wars: Galaxy's Edge is a fully-themed land set in Disney's Hollywood Studios. The land aims to immerse visitors in the world of Star Wars™ like never before, by creating a living, breathing city called Black Spire Outpost. 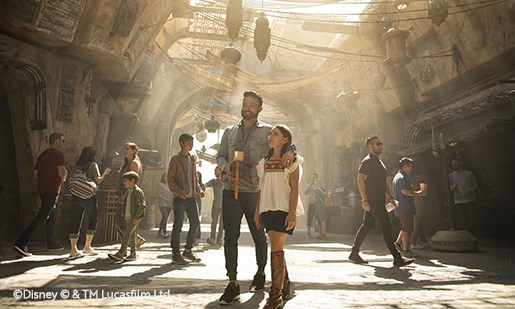 Star Wars: Galaxy's Edge flys guests to the outer reaches of the galaxy, to the planet of Batuu. There, you'll explore the Black Spire Outpost, an infamous spot for some of the galaxy’s less honourable individuals. Scoundrels, rogues and smugglers alike frequent the outpost to avoid the watchful eye of the First Order.

As you wander its weathered streets you’ll encounter local shops and diners, nestled between the large black spires that gives the outpost its name. 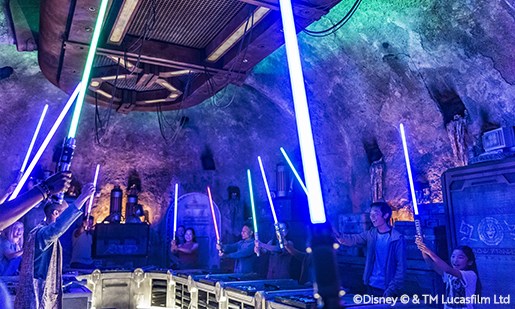 Travel to Black Spire Outpost for your chance to create your very own lightsaber.

In this part-show, part-experience, that dream finally comes true. Not only do you get to build your own lightsaber from scratch, starting with the mystical kyber crystal, but you can take it home with you too! (Purchase required).

Price per person: $199.99 (plus tax). You can bring one guest in with you for free, but they won’t get the chance to build a lightsaber.

Reservation recommended: Savi’s Workshop can be reserved up to 180 days before your trip (a deposit is required equal to the full price of the experience). There will be very limited walk-in availability, so booking is highly recommended. Cancellations can be made up to the day before without penalty; however, any no-shows will lose their deposit. Reservations can be made through My Disney Experience app or on www.mydisneyexperience.co.uk. 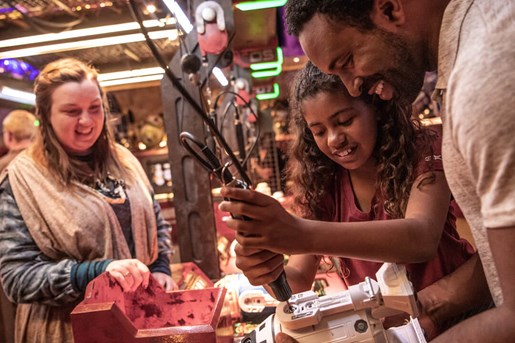 Ever wanted to build your own droid? Well now you can!

At Droid Depot, you get the unique chance to build and activate your robotic companion. Choose whether you want a BB or R unit, pick your parts and colour scheme from a conveyor belt, and assemble it yourself by hand. And of course, you get to take your new droid home with you; it’ll even react to its surroundings as you walk around the park!

Price per person: $99.99 (plus tax). You can bring one guest in with you for free, but they won’t get the chance to build a droid.

Reservation recommended: Droid Depot can be reserved up to 180 days before your trip, (a deposit is required equal to the full price of the experience). There will be very limited walk-in availability, so booking is highly recommended. Cancellations can be made up to the day before without penalty; however, any no-shows will lose their deposit. Reservations can be made through My Disney Experience app or on www.mydisneyexperience.co.uk. 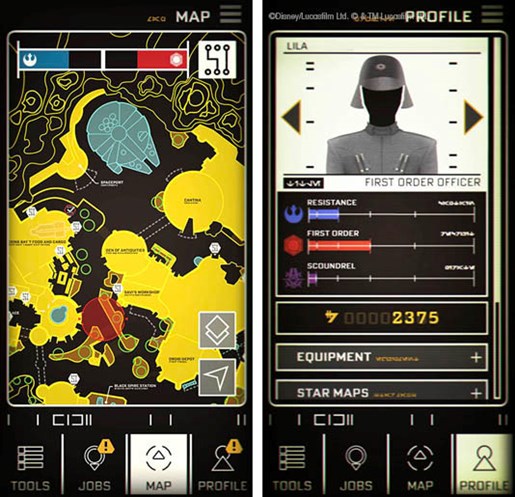 Live Your Own Star Wars Story

For an added level of immersion, guests can turn their smartphones into personal datapads through the Play Disney Parks app. With it, you can access hidden features in the park - with the ability to interact with droids, scan for information and translate foreign languages.

The next time you return to the park your profile will be remembered. You’ll be able to take on more difficult tasks, earn more credits, and fall deeper into the lore of Black Spire Outpost.

Millennium Falcon: Smugglers Run is an epic, interactive flight simulator, where the choices you make define the whole experience.

Led by space pirate Hondo Ohnaka, you and your crew of six take on a covert mission to retrieve some precious loot. You’ll fill one of three roles: pilot, engineer or gunner, where your performance makes a real difference to the success of your mission! Along the way you’ll face excitement around every turn, plus the looming threat of the First Order—who will forever label you as an enemy. Get ready to punch it!

Star Wars: Rise of the Resistance

Star Wars: Rise of the Resistance

In ‘the biggest and most immersive Disney Parks attraction ever’, you and your resistance force has been captured by a hulking Star Destroyer. Surrounded by Stormtroopers, you’ll have to dodge blaster fire, avoid a giant AT-AT, and prepare for a final showdown with Kylo Ren himself.

Star Wars: Rise of the Resistance is set to open on 5th December 2019.

When in Batuu, what better than to sample some authentic Batuu cuisine? The local menus are exotic, delicious, and offer a galactic change from the rest of the food at Walt Disney World Resort. 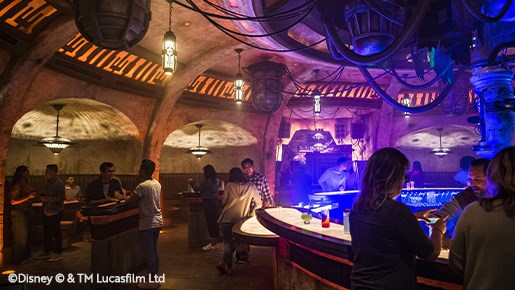 Black Spire Outpost’s local watering hole is Oga’s Cantina. In this lively cantina experience, you can try local concoctions of alcoholic drinks and mocktails. Some of the drinks, including Yub Nub and Cliff Dweller, come with their own commemorative mugs that you can keep! Fear not, there’ll be no bar fights on account of the two-drink limit.

Reservation recommended: Entrance to Oga’s cantina can be reserved for free up to 180 days before your trip. There will be very limited walk-in availability, so booking is highly recommended. Cancellations can be made up to the day before without penalty; however, any no-shows will be charged. Reservations can be made through My Disney Experience app or on www.mydisneyexperience.co.uk.

Bubo Wamba Family Farms presents their local favourite: Blue Milk or Green Milk. So grab a cup of the good stuff and take it easy. Note that the drinks do not actually contain milk, and are in fact more of a non-dairy smoothie.

Ronto Roasters is famous for its Ronto Wrap, which comes with a choice of sausage or roasted pork. They say the secret to the flavour is in the grill; a recycled pod racing engine.

This humble store sells one thing and one thing only: Outpost Popcorn mix. It’s a unique mix of popcorn, with a unique sweet, savoury and spicy flavour.

Black Spire Outpost is filled with local merchants carrying a wide range of wares, from clothing to strange artifacts. It’s also home to official First Order and Resistance supply stores - just don’t be caught sniffing around in both! 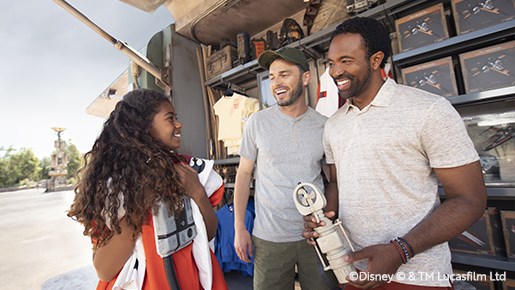 Shops in Black Spire Outpost include:

Opens: 9am
Closes: 9pm-12am(depending on the time of year)

If you need to know times for a specific date, we recommend checking with the park just before you visit.

For a limited time: From 1st September to 1st November 2019, Star Wars: Galaxy’s Edge is available for Extra Magic Hours, opening between 6am and 9am for guests staying at participating Walt Disney World Resort hotels.

Entry is free with your Disney World admission, however the land has a set maximum capacity. If the land is full, you can join a virtual queue on the My Disney Experience App. You'll be able to continue exploring the rest of the Hollywood Studios park while you wait for space to open within Star Wars: Galaxy's Edge.

Reservations are only currently available for Savi's Workshop, Droid Depot and Oga's Cantina. These can be booked up to 180 days in advance through the My Disney Experience app, or www.mydisneyexperience.co.uk. Credit card deposits are required and are as follows:

Cancellations can be made up to the day before without penalty; however, any no-shows will lose their deposit.

Disney's Hollywood Studios has a large paid car park. From here you can either walk to the park or board a tram which takes you straight to the entrance.

If you can't see the walkway from your car, it’s probably better to take the tram.

Once you’ve paid for parking at one Walt Disney World Resort Park, you can park at any of the other parks free for the rest of that day!

Staying at a Disney Hotel?

If you are staying at a Walt Disney World Resort hotel, you can park at Disney's Hollywood Studios for free. Just make sure you have a valid Key to the World Card or Resort Parking Permit.

The car parks at Walt Disney World Resort are huge - write down your row and lot number to make sure you don’t lose your car!

If you do forget where you’ve parked, let the tram driver know the approximate time you arrived, and they should be able to direct you to the right area.

What can I bring into Disney's Hollywood Studios?

Food items, such as snacks or food that does not require heating, are allowed to be brought into the Disney Parks. However you must let a Security Cast Member know if you are bringing in any food items when you enter the park.

Alcohol is not allowed to be brought into the Disney Parks.

What to wear at Disney’s Hollywood Studios

Casual and comfortable clothes are a must for a day at the Disney Parks, as are good walking shoes – you want to have fun, not worry about sore feet!

Rain showers are common in the afternoons, so you may want to bring a waterproof jacket or poncho just in case.

Shoes and shirts must be worn at all times inside the Disney Parks.

What am I not allowed to wear at Disney's Hollywood Studios?

Capacity for Disney’s Hollywood Studios, Star Wars: Galaxy’s Edge and its experiences is limited. Access to the Park, land and experiences may be restricted or unavailable depending on Guest demand and other factors. Star Wars: Rise of the Resistance attraction opens later in the year. ©Disney © &. TM Lucasfilm, Ltd.

Our Disney tickets include admission to Star Wars: Galaxy's edge in Disney's Hollywood Studios, plus all the other Disney Parks!