You'll find magical spells, dark villains and daring heroes at The Wizarding World of Harry Potter™ - Hogsmeade™, which is located at Universal’s Islands of Adventure.

Venture inside Hogwarts™ castle, eat at the Three Broomsticks™ and come face-to-face with magical creatures as you soar over the castle on the thrilling ride Harry Potter and the Forbidden Journey™.

Travel between both lands of The Wizarding World of Harry Potter™ by riding the Hogwarts™ Express# between Hogsmeade™ Station at Universal's Islands of Adventure and Kings Cross Station at Universal Studios Florida with your Universal Orlando Explorer Ticket, available to buy with FloridaTix. 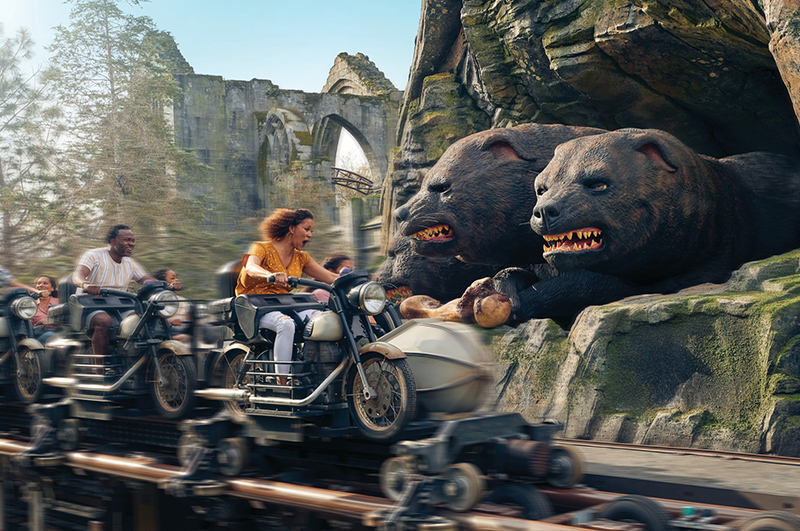 For the first time ever, join Hagrid™ as you fly deep into the wilds of the Forbidden Forest, beyond the grounds of Hogwarts™ castle, on a thrilling roller coaster ride that dashes and dives between hidden mysteries and some of the rarest magical creatures.

Hold on as your motorbike soars through towering trees, roars into deadly Devil’s Snare and blasts you into the path of beasts like you’ve never seen before on an all-new, freewheeling adventure.

Top Things to Do at Hogsmeade™ 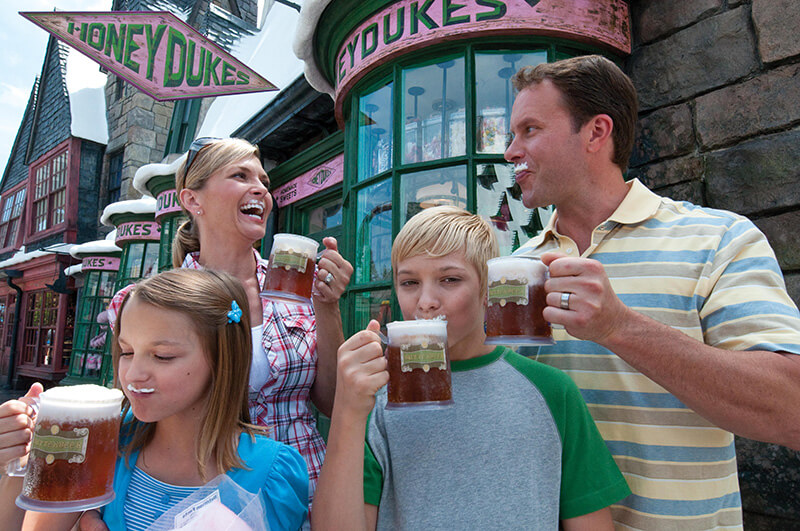 If you’re planning on visiting both parks, it’s a good idea to ride the Hogwarts™ Express as it’s the best way to stay immersed in the magic as you travel between King's Cross Station in Universal Studios Florida and Hogsmeade™ Station in Universal’s Islands of Adventure.

And as the sun begins to set, it’s recommended you make your way back to Hogsmeade to watch The Nighttime Lights at Hogwarts™ Castle. (Select nights)

Don’t forget – the train journeys are different depending which way you’re travelling, so make sure you also take the train both ways! 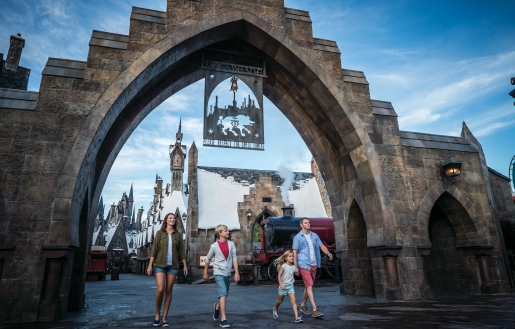 If you’re staying at a Universal Orlando hotel you’ll get the added bonus of EARLY PARK ADMISSION* to The Wizarding World of Harry Potter™ or Universal’s Volcano Bay.

Breeze into the Parks (one hour) before regular guests every morning and enjoy more ride time, more free time and more family time every day of your holiday! 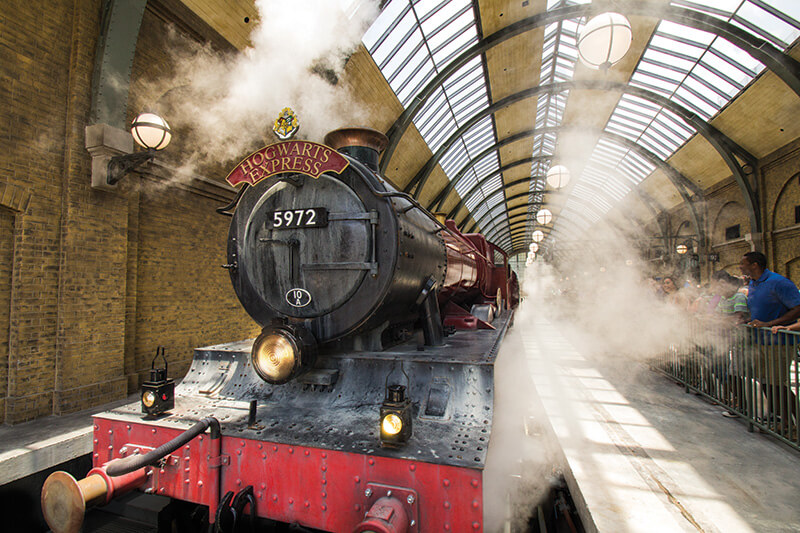 It’s what every Harry Potter™ fan dreams about – you can actually take a real train journey on the Hogwarts™ Express!

The Hogwarts™ Express connects the two lands  of The Wizarding World of Harry Potter™, so when you take the journey you’ll be travelling from one Universal Orlando theme park to the other. Even the departing train stations are true to the Harry Potter™ books and films, with the train going between Hogsmeade™ Station in Universal's Islands of Adventure and Platform 9¾™ at King's Cross Station in Universal Studios Florida.

Depending on which way you’re travelling, the experience will be different! You’ll have views of the English countryside and London, as well as some unexpected surprises along the way! (Remember, you'll need a  Universal Orlando Explorer Ticket in order to ride the Hogwarts™ Express)

The Nighttime Lights at Hogwarts Castle

As the stars begin to rise over Hogsmeade™, the magic continues as the iconic Hogwarts™ castle is completely transformed into a stunning spectacle of light and sound!

The Nighttime Lights at Hogwarts™ Castle is a breath-taking experience, with state-of-the-art projection mapping, and special effects wrapping Hogwarts™ castle in celebration of its four houses - Gryffindor™, Hufflepuff™, Ravenclaw™ and Slytherin™.

Embrace your Hogwarts™ pride as each house is honoured in a dazzling display set to enchanting music based on the original scores from the Harry Potter™ films.

Catch The Nighttime Lights at Hogwarts™ Castle on select nights.

Rides at The Wizarding World of Harry Potter™ – Hogsmeade™ 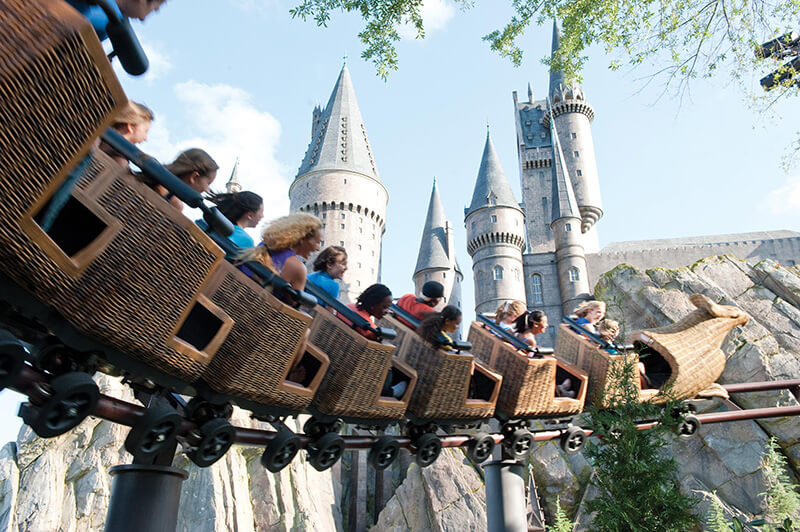 Harry Potter and the Forbidden Journey™

This thrilling adventure ride takes you through the familiar classrooms and corridors of Hogwarts™ School of Witchcraft and Wizardry, and flying high over the castle with Harry Potter™ and his friends. You'll visit iconic locations from the movies, and come face-to-face with all kinds of magical creatures!

Flight of the Hippogriff™

This family coaster is modelled on the Hippogriff itself - a magnificent, magical creature with the head of a giant eagle and the body of a horse.

You’ll start off at Hagrid’s hut, before taking a "training flight" as the coaster swoops and spirals around the pumpkin patch. Don’t forget to bow as you approach the Hippogriff!

This is where to shop for your Hogwarts™ supplies and more magical items!

Our favourite buys from Dervish and Banges™:

Take a peek inside this captivating grotto and you’ll see all kinds of weird and wonderful confiscated items from the world of wizards!

This is also where you can purchase a photo of your experience on Harry Potter and the Forbidden Journey™.

Stock up on enchanted goodies at Harry, Ron and Hermione’s favourite sweet shop!

Our favourite sweets to get from Honeydukes:

The place where Harry Potter™ was first chosen by his wand!

Make sure you get to see (or even take part in) the wand experience, where a lucky guest has the opportunity to try out a few spells with various wands until the right wand chooses them!

You can also pick up a replica of the Harry Potter™ film characters' wands, or even a collectors’ wand set – there’s a lot of wands to choose from!

Send a letter with a special Hogsmeade™ postmark! You can also buy stationery here, and lots of owl stuff!

Restaurants at The Wizarding World of Harry Potter™ – Hogsmeade™

In this cavernous restaurant you can feast on meals like fish & chips, shepherd's pie, macaroni cheese and their speciality, the "Great Feast Platter"!

And make sure you leave some room for the scrummy desserts, which include apple pie, strawberry and peanut-butter ice-cream and chocolate trifle.

Raise a glass in the pub that was used as a secret meeting place for Dumbledore’s Army™!

In the Hog’s Head™ you can sample a wizarding world favourite – Butterbeer™! They also serve Pumpkin Juice™, as well as a more standard selection of drinks.

Look out for the large stuffed hog's head behind the bar which is known to snarl at guests!

Key Facts for Visitors to Universal's Islands of Adventure

Opens: 9am
Closes: Depending on season

If you require specific times we recommend to check with the park before you visit.

You can use the Universal Orlando Resort car park, which is under-cover and has travelators, escalators and lifts for getting around.

*Except on Halloween Horror Nights. Pricing is subject to change.

You are welcome to leave the car park and return the same day without paying again – just make sure you keep your parking ticket with you as you will need to show it at the toll plaza when you re-enter.

Scripts outlining the dialogue in many of the attraction experiences are available in large font and embossed in Braille at the Guest Services lobby at the Universal Orlando theme parks.

Guests should properly secure or remove all prosthetic limbs before riding the following attractions to prevent hazards or loss due to ride forces:

Any guest with prosthetic arms or hands will be required to ensure the limb is properly attached and able to grasp the ride restraint. Certain hand, arm, leg, and joint elements may be required to ride safely.

From I-4 Westbound (Downtown Orlando):

What food can I bring into the Park?

Because there are some great places to eat and drink at The Wizarding World of Harry Potter™, bringing your own food is generally discouraged. However there are some items that you are allowed to bring with you. Please see below for a full list of acceptable and prohibited items:

Fancy being part of the magic? You can experience The Wizarding World of Harry Potter™ - Hogsmeade™ at Universal's Islands of Adventure by getting your Universal Orlando Resort tickets right here at UK prices!

Before visiting Universal Orlando, review the safety guidelines at UniversalOrlando.com/SafetyInfo.